In a programming language, the type system is the foundation for representing data and implementing logic. It provides the means of creating abstractions to the solutions that you provide. While some languages provide basic functionality, others strive to give in-built functionality for specialized domains.

With more services being available in the cloud, the network-distributed programming domain has grown. As the developer is given the added responsibility of working with networked resources in their code, the programming language itself must aid in this operation. That’s why Ballerina’s network-friendly type system is specialized for this domain.

The type system of the Ballerina language is primarily structural with added support for nominal typing. This means that the type compatibility is identified by considering the structure of the value rather than just relying on the name of the type. This is different from languages like Java, C++, and C# that have nominal type systems in which it is bound by the name of the actual type.

Types in Ballerina deal with an abstraction of values that don't consider storage identity. This abstraction is called a shape. For simple types like int and boolean, there is no difference between a shape and a value because they don't have a storage identity. To understand the concept of a shape, let’s look at the record type in Ballerina. Because records have storage identity, a reference to the value is stored in the variable rather than storing the actual value. This is comparable to references in Java or pointers in C++.

Here’s an example of a record that stores the state of a door:

Now, let’s create some values of the DoorState record type:

The three variables above all represent a single state of the door being closed and locked. Nonetheless, we have created three different values where each variable is stored in a distinct memory reference. If we ignore the storage identity of these variables, we are left with the representation of the data it has, which is {open: false, locked: true}. This is a single shape of the type DoorState.

In this way, there are four possible shapes for DoorState as shown in the variables below:

A type in Ballerina represents a set of possible shapes it can have. So any value that belongs to either of the above four shapes will be considered to be of the type DoorState.

Figure 1: Set of shapes of the type DoorState

The type boolean is a simple basic type in Ballerina without storage identity so its values become equivalent to its shapes. Therefore, the boolean type is defined as having two shapes, true and false.

The boolean type's shapes can be defined in set notation as Sboolean = { true, false }. This can be visualized as seen in Figure 2 below.

Figure 2: Set of shapes of the type boolean

Now, according to our subtyping rules, we can derive new types based on the boolean type by creating subsets of its shapes. For example, a new type we can create is boolean_false, where its only supported shape/value would be false. The new type is shown in Figure 3 below.

The new type boolean_false can be defined in Ballerina code in the following manner:

This example uses the value false to define the new boolean_false type. In a more practical scenario, you can provide multiple values as a union when defining new types using the T1|T2 syntax. A type that denotes only a single shape is called a singleton type. This new type can be used in the code in the following way.

We have now seen how Ballerina's subtyping works in relation to simple types. Let's take a look at creating subtypes of records by revisiting our DoorState scenario. Here, we will create a new type EmergencyDoorState, where the locked field has to always have the value false. The resultant types and their shapes can be seen below in Figure 4. 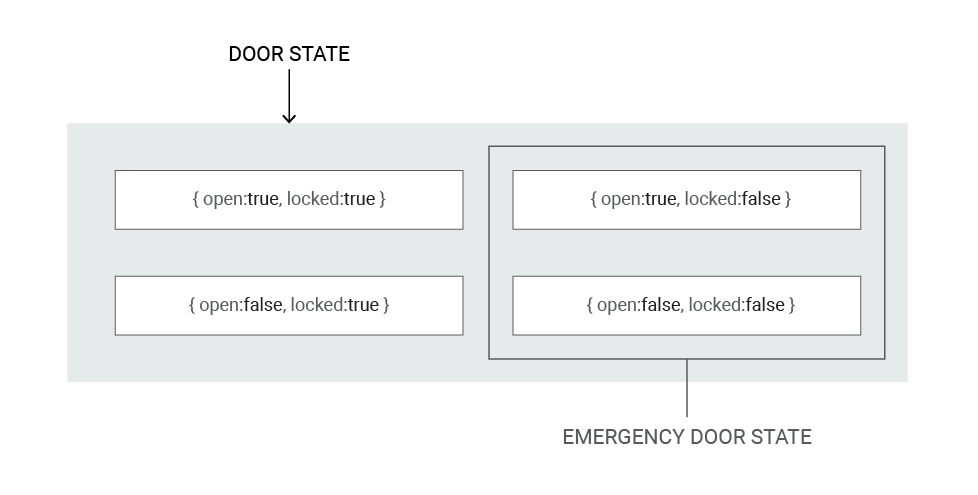 The type definition of EmergencyDoorState type is shown below:

In the above type, we have modified the field locked to be of type boolean_false, which allows its only value to be false. In this type definition, default values in Ballerina records have been used, wherein the absence of an explicit value provided by the user, the default value mentioned here will be used.

The following code snippet shows a sample usage of the EmergencyDoorState type:

Benefits of a structural type system

A structural type system proves beneficial when you have multiple systems interacting with each other since data exchange and type compatibilities can be resolved easier. Let's dive into a Ballerina integrated query example, which shows this behavior.

In the example above, you filter records from a list and create a new value of type Result using the select clause. These values are assigned to an array of Result records, which is possible because the generated values are of the Result record type.

In situations such as above, a separate system from our core application may be generating values to be consumed by us. In these cases, instead of worrying about sharing the code for the data type definitions, you can simply concentrate on the compatibility of the data in order to ensure interoperability.

Ballerina's open-by-default concept is tied around the robustness principle. This means that you should design network-aware programs to accept all the data that is sent to you and make the best effort to understand it. Also, when sending data, you should make the best effort to conform to the standard protocols that were agreed upon beforehand. This strategy makes sure you have the best chance of interacting with different systems reliably.

The main facilitator of this in the type system is the open record concept in Ballerina. The sections above demonstrated closed records and the sections below demonstrate open records with a record type that represents the details of a person.

The code snippet below shows a simple HTTP GET request to an endpoint:

Let’s create a new type Student, which will be a subtype of the Person type.

Sample usage of the above types is shown below:

The type system features for records in Ballerina can be used when implementing data binding operations with structural validation, data types handling, and payload passthrough operations. The functionality will be demonstrated using an HTTP service in Ballerina: