The Network in the Language

In a microservice architecture, smaller services are built, deployed and scaled individually. These disaggregated services communicate with each other over the network forcing developers to deal with the Fallacies of Distributed Computing as a part of their application logic.

For decades, programming languages have treated networks simply as I/O sources. Ballerina treats the network differently by making networking concepts like client objects, services, resource functions, and listeners a part of the syntax. So you can use the language-provided constructs to write network programs that just work.

Here’s a simple Hello World service to get you started:

The Ballerina source file is compiled and executed in the following manner:

Ballerina services come with built-in concurrency. Every request to a resource method is handled in a separate strand (Ballerina concurrency unit), which gives implicit concurrent behavior to a service.

Some protocols supported out-of-the-box include:

In the request-response paradigm, network communication is done by blocking calls, but blocking a thread to a network call is very expensive. That’s why other languages supported async I/O and developers have to implement async/await by using callback-based code techniques.

On the other hand, Ballerina’s request-response protocols are implicitly non-blocking and will take care of asynchronous invocations.

The code snippet below shows a call to a simple HTTP GET request endpoint:

The above “get” operation is seemingly a blocking operation for the developer, but internally it does an asynchronous execution using non-blocking I/O, where the current execution thread is released to the operating system to be used by others. After the I/O operation is done, the program execution automatically resumes from where it was suspended. This pattern gives the developer a much more convenient programming model than handling non-blocking I/O manually while providing maximum performance efficiency.

The syntax and semantics of Ballerina’s abstractions for concurrency and network interaction were designed to closely correspond to sequence diagrams. This provides a visual model that shows how the program interacts using network messages.

The sequence diagram below is generated from a sample Salesforce integration microservice. 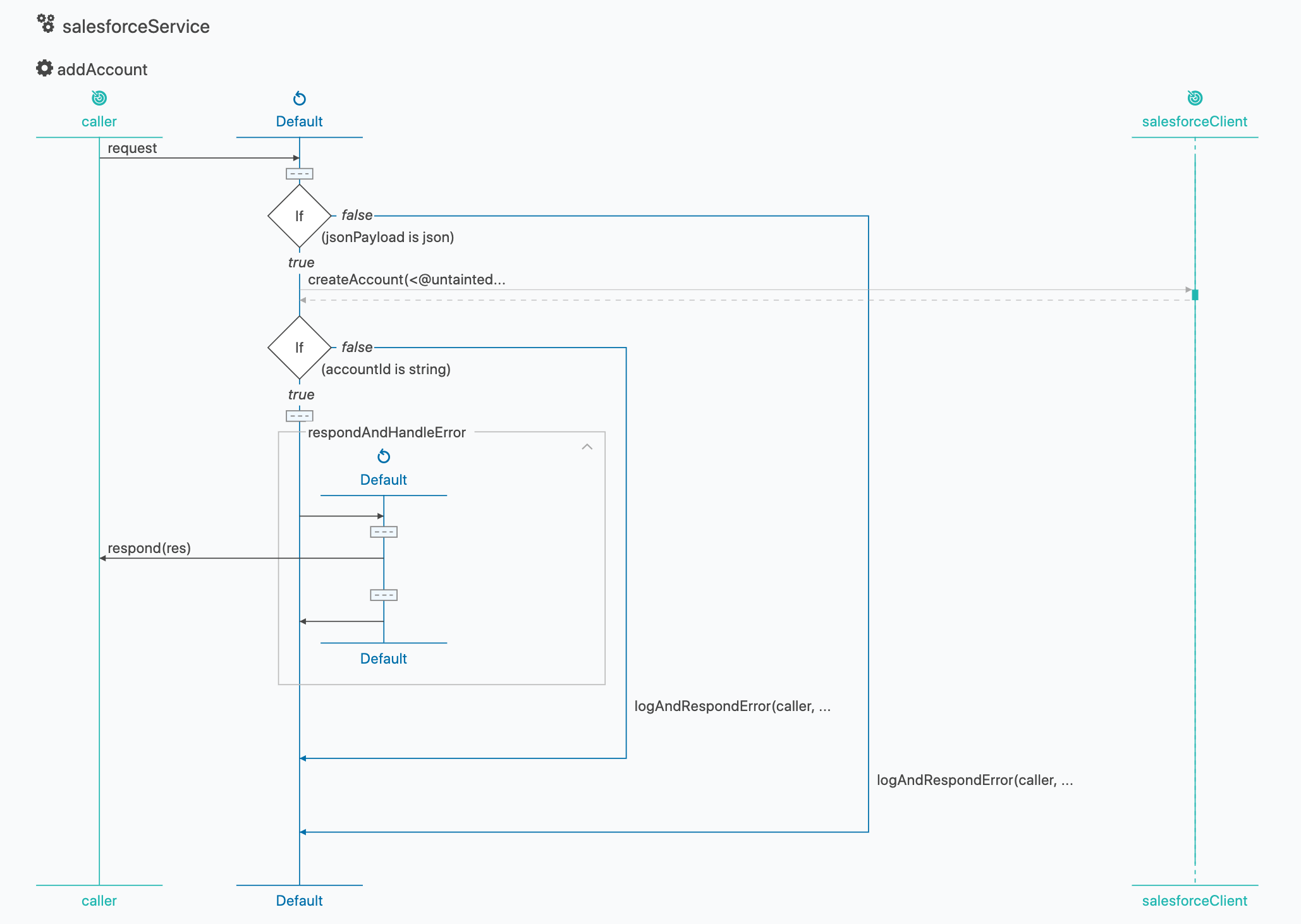 To start generating a sequence diagram from your Ballerina code, download the VSCode plugin and launch the graphical editor.

"[With Ballerina] you can get sequence diagrams automatically. When things start to get complicated and you need to understand and socialize with the rest of your team what it is that you're building, these diagrams become very helpful," stated.

The network is unreliable. That’s why network programs need to be written in a way that handles failures. In some cases, an automatic retry will help recover from failures while in others failover techniques will help deliver uninterrupted service. Techniques like circuit breakers also help to prevent catastrophic cascading failure across multiple programs.

The code snippet below shows how you can easily configure a circuit breaker to handle network-related errors in the Ballerina HTTP client object.

Due to the inherent unreliability of networks, errors are an expected part of network programming. That’s why in Ballerina errors are explicitly checked rather than thrown as exceptions. It’s impossible to ignore errors by design because of Ballerina’s comprehensive error handling capabilities:

Below is a simple example of how you can explicitly check for errors:

The tweet remote method can return the expected twitter:Status value or an error due to network unreliability. Ballerina supports union types so the status variable can be either twitter:Status or error type. Also the Ballerina IDE tools support type guard where it guides developers to handle errors and values correctly in the if-else block.

Distributed systems work by sharing data between different components. Network security plays a crucial role because all these communications happen over the network. Ballerina provides built-in libraries to implement transport-level security and cryptography to protect data.

Identity and access management also plays a critical role in microservice-based applications. Ballerina supports out-of-the-box protection for services as well as clients by using Basic-auth, OAuth2 and JWT. The following BBEs show how to secure services and clients by enforcing authorization.

Ballerina ensures security by default. Its built-in taint analyzer makes sure that malicious, untrusted data doesn’t propagate through the system. If untrusted data is passed to a security-sensitive parameter, a compiler error is generated. You can then redesign the program to erect a safe wall around the dangerous input.

Increasing the number of smaller services that communicate with each other means that debugging an issue will be harder. Enabling observability on these distributed services will require effort. Monitoring, logging, and distributed tracing are key methods that reveal the internal state of the system and provide observability.

Ballerina becomes fully observable by exposing itself via these three methods to various external systems. This helps with monitoring metrics such as request count and response time statistics, analyzing logs, and performing distributed tracing. For more information, follow this guide:

Below is a simple example of how you can explicitly check for errors: