Observability is a measure of how well internal states of a system can be inferred from knowledge of its external outputs.

Table of contents   Expand all   Collapse all

Monitoring, logging, and distributed tracing are key methods that reveal the internal state of the system to provide observability. Ballerina becomes fully observable by exposing itself via these three methods to various external systems allowing to monitor metrics such as request count and response time statistics, analyze logs, and perform distributed tracing.

This guide focuses on enabling Ballerina service observability with some of its supported systems. Prometheus and Grafana are used for metrics monitoring, and Jaeger is used for distributed tracing. Ballerina logs can be fed to any external log monitoring system like Elastic Stack to perform log monitoring and analysis.

Follow the steps below to observe a sample Ballerina service.

Step 1 - Setting up the Prerequisites

Make sure you have already installed Docker to set up external products such as Jaeger, Prometheus, etc. You can follow Docker documentation to install Docker.

Create a Service as shown below and save it as hello_world_service.bal.

By default, observability is not included in the executable created by Ballerina. It can be added by using the –observability-included build flag or by adding the following section to the Ballerina.toml file.

Observability is disabled by default at runtime as well and it can be enabled selectively for metrics and tracing by adding the following runtime configurations to the Config.toml file.

When Ballerina observability is enabled, the Ballerina runtime exposes internal metrics via an HTTP endpoint for metrics monitoring and traces will be published to Jaeger. Prometheus should be configured to scrape metrics from the metrics HTTP endpoint in Ballerina.

Ballerina logs are logged on the console. Therefore, the logs need to be redirected to a file, which can then be pushed to Elastic Stack to perform the log analysis.

Therefore, redirect the standard output to a file if you want to monitor logs.

Step 6 - Viewing Tracing and Metrics in the Dashboard

Sample view of Jaeger dashboard for hello_world_service.bal is shown below.

Sample view of Grafana dashboard for hello_world_service.bal is shown below. 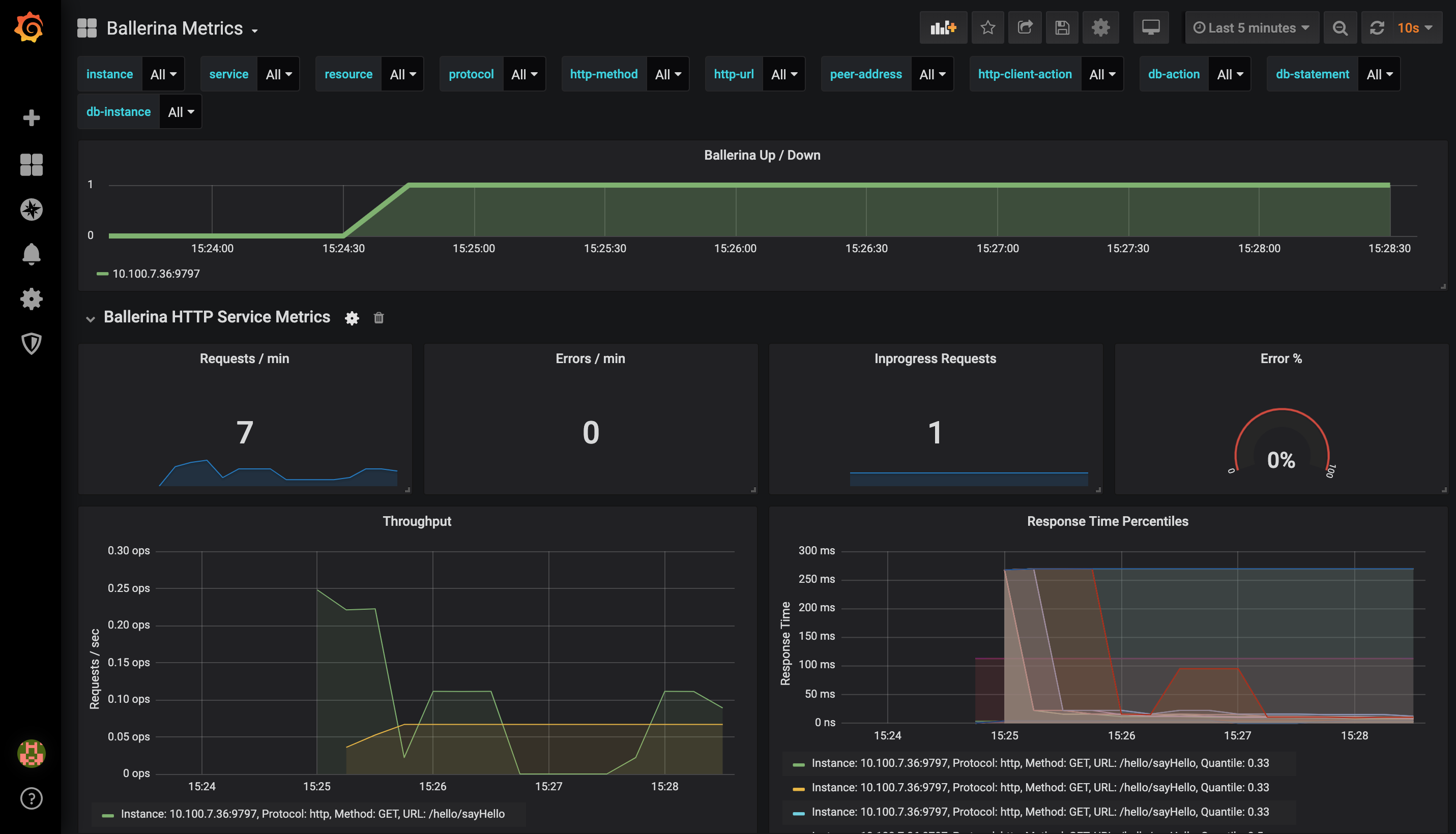 If you have configured log analytics, view the logs in Kibana via http://localhost:5601 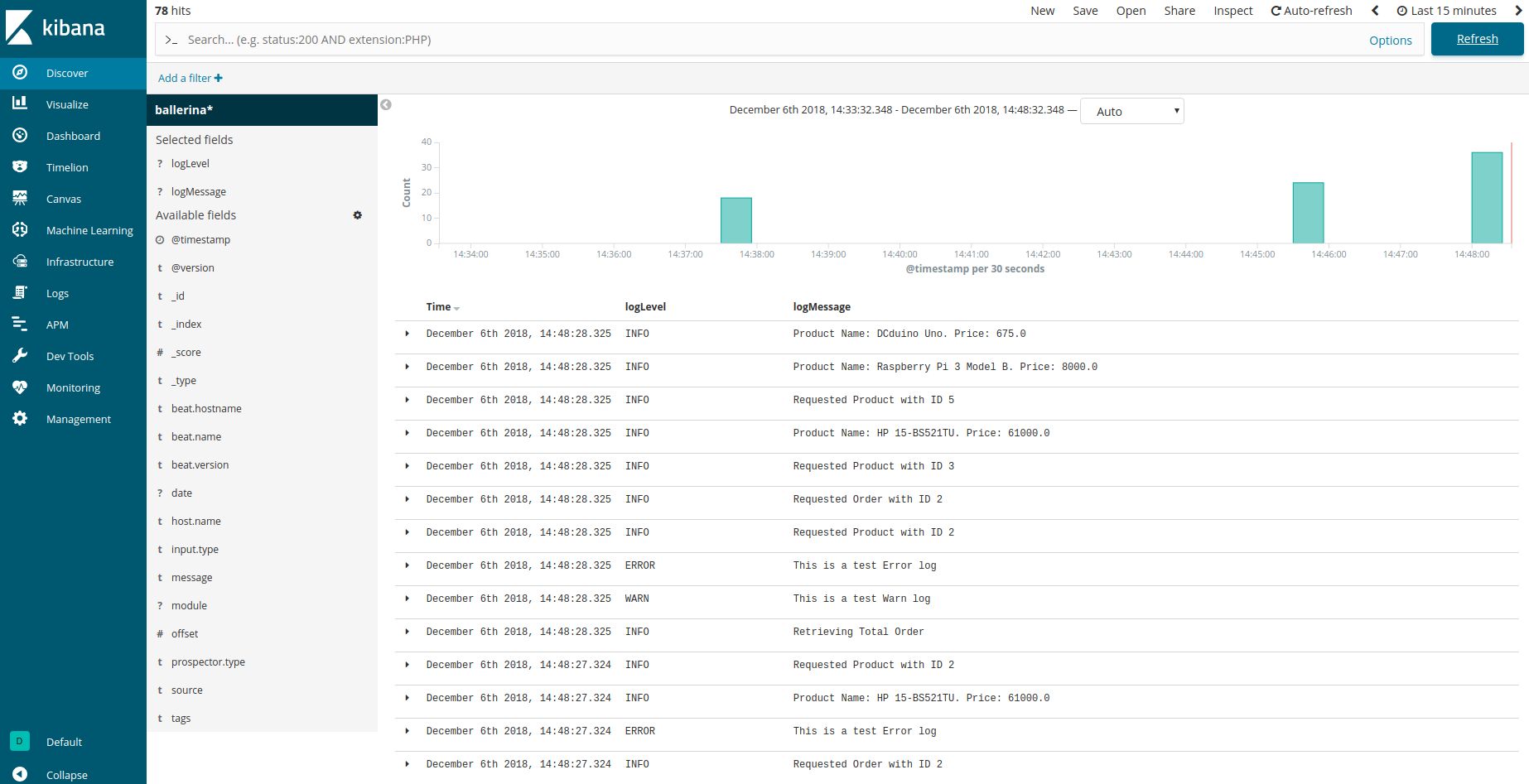 Metrics help to monitor the runtime behavior of a service. Therefore, metrics are a vital part of monitoring Ballerina services. However, metrics are not the same as analytics. For example, you should not use metrics to do something like per-request billing. Metrics are used to measure what Ballerina service does at runtime to make better decisions using the numbers. The code generates business value when it continuously runs in production. Therefore, it is imperative to continuously measure the code in production.

In order to support Prometheus as the metrics reporter, an HTTP endpoint starts with the context of /metrics in default port 9797 when starting the Ballerina service.

This section focuses on the Ballerina configurations that are available for metrics monitoring with Prometheus, and the sample configuration is provided below.

The descriptions of each configuration above are provided below with possible alternate options.

Setting Up the External Systems for Metrics

Tip: There are many other ways to install the Prometheus and you can find possible options from installation guide.

Here the targets 'a.b.c.d:9797' should contain the host and port of the /metrics service that’s exposed from Ballerina for metrics collection. Add the IP of the host in which the Ballerina service is running as a.b.c.d and its port (default 9797). If you need more information, go to the Prometheus Documentation.

If your Ballerina service is running on localhost and Prometheus in a Docker container, add the target as host.docker.internal:9797 to access the localhost from Docker.

Let’s use Grafana to visualize metrics in a dashboard. For this, we need to install Grafana, and configure Prometheus as a data source. Follow the steps below to configure Grafana.

For more information, go to Grafana in Docker Hub. 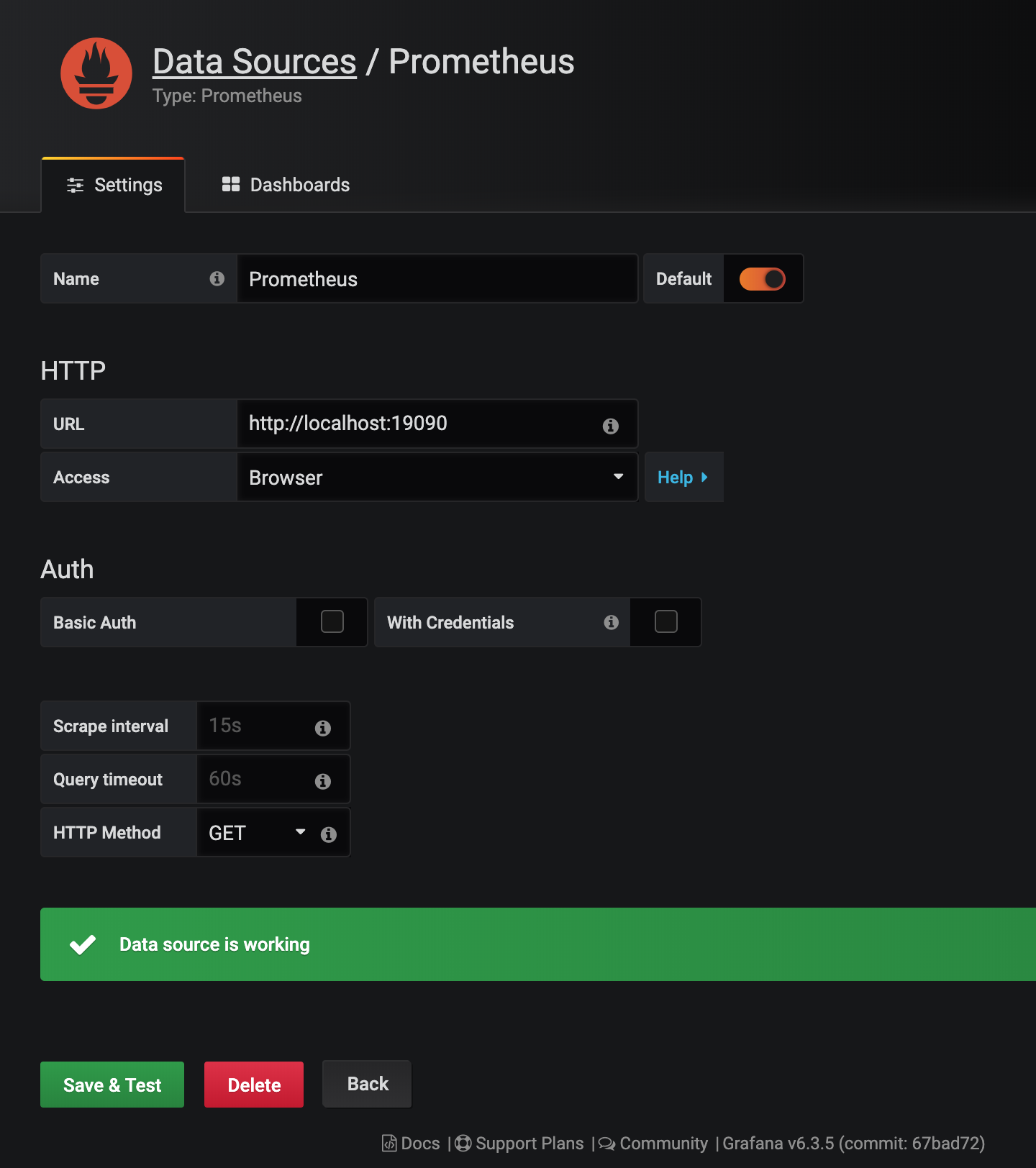 Ballerina HTTP Service Metrics Dashboard Panel will be as below. 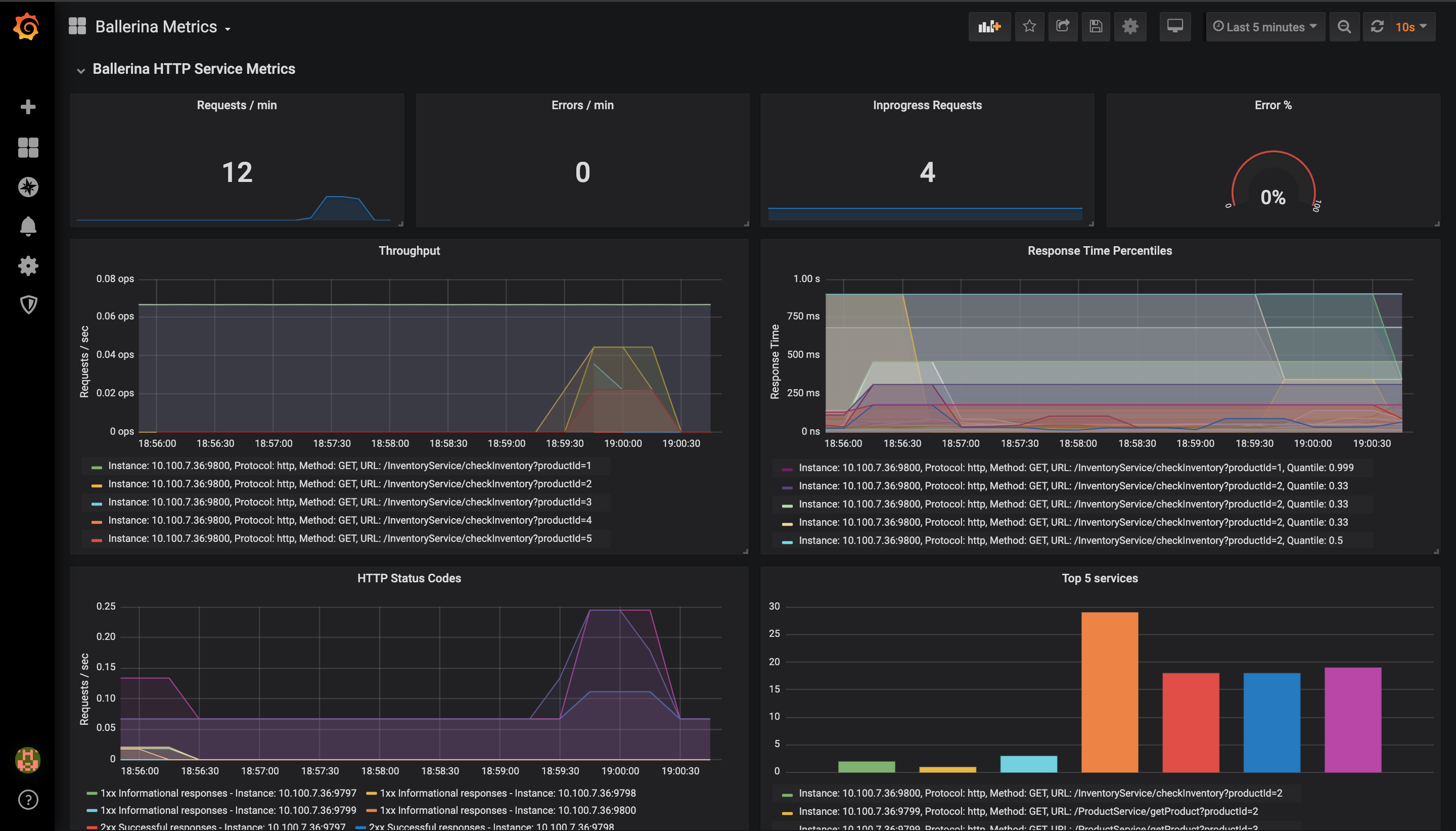 Ballerina HTTP Client Metrics Dashboard Panel will be as below. 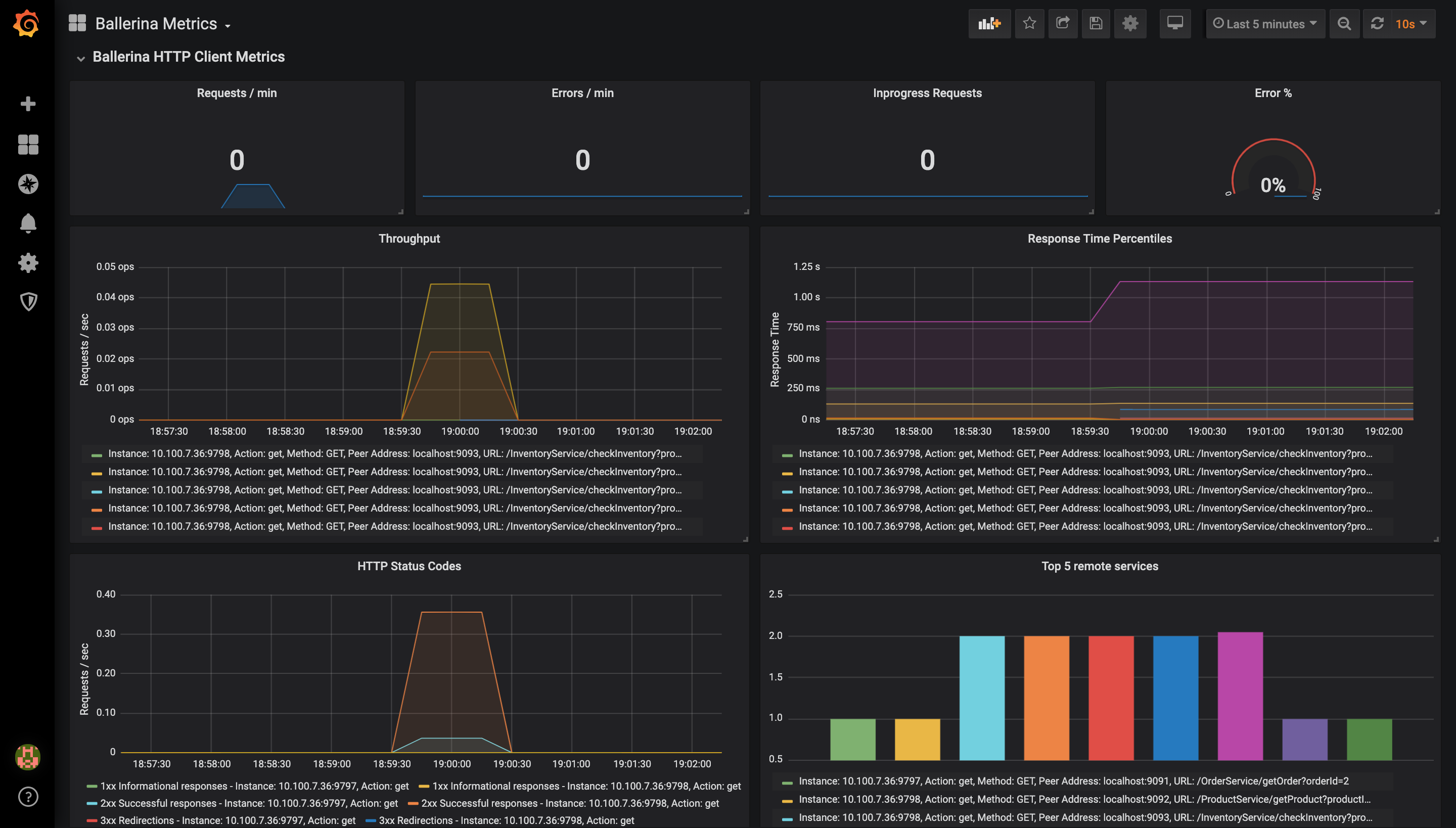 Ballerina SQL Client Metrics Dashboard Panel will be as below. 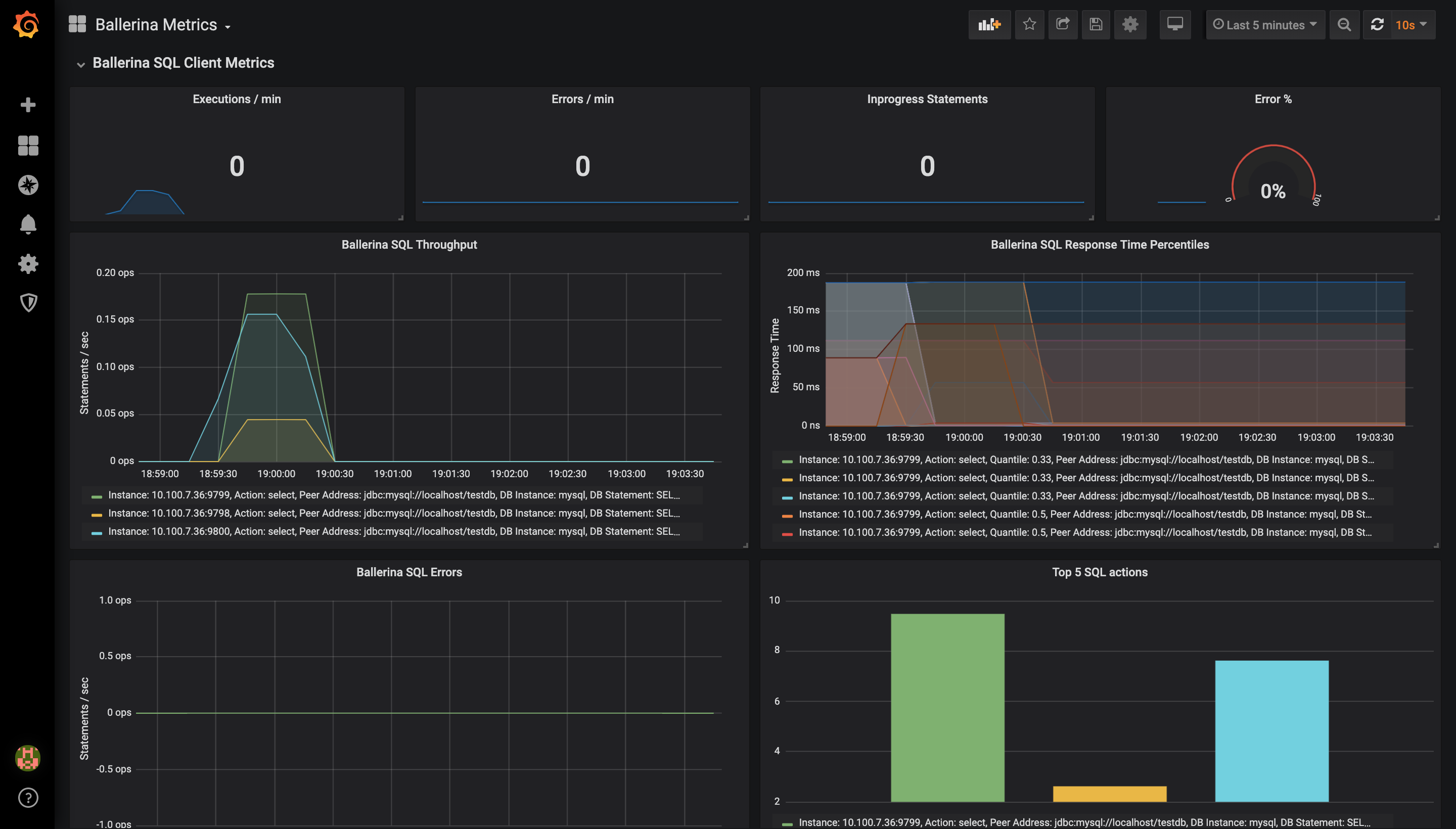 Tracing provides information regarding the roundtrip of a service invocation based on the concept of spans, which are structured in a hierarchy based on the cause and effect concept. A trace can spread across several services that can be deployed in several nodes, depicting a high-level view of interconnections among services as well, hence coining the term distributed tracing.

A span is a logical unit of work, which encapsulates a start and end time as well as metadata to give more meaning to the unit of work being completed. For example, a span representing a client call to an HTTP endpoint would give the user the latency of the client call and metadata like the HTTP URL being called and HTTP method used. If the span represents an SQL client call, the metadata would include the query being executed.

Tracing gives the user a high-level view of how a single service invocation is processed across several distributed microservices.

Tracing can be enabled in Ballerina with the few configurations as mentioned in the Observing a Ballerina Service. This section mainly focuses on the configuration options with the description and possible values.

The sample configuration that enables tracing and uses Jaeger as the tracer as provided below.

The below are the sample configuration options that are available to support Jaeger as the tracer provider in Ballerina.

Setting Up the External Systems for Tracing

You can configure Ballerina to support distributed tracing with Jaeger. This section focuses on configuring Jaeger with Docker as a quick installation.

Setting Up the Jaeger Server

There are many possible ways to deploy Jaeger. For more information, see Deployment. This focuses on an all-in-one deployment with Docker.

The image below is the sample tracing information you can see from Jaeger. 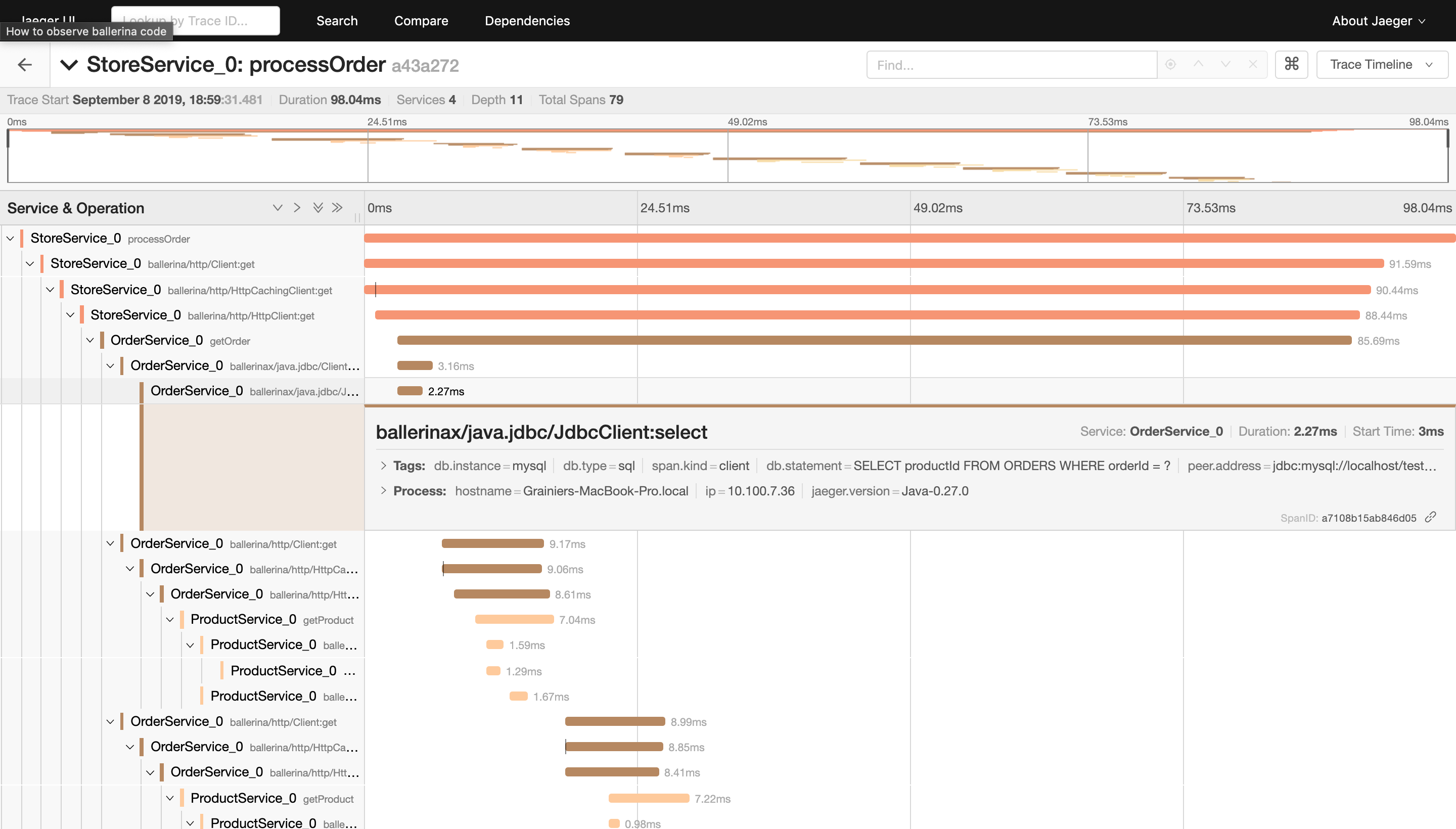 Ballerina distributed logging and analysis is supported by Elastic Stack. Ballerina has a log module for logging in to the console. In order to monitor the logs, the Ballerina standard output needs to be redirected to a file.

This can be done by running the Ballerina service as below.

You can view the logs with the command below.

The elastic stack comprises of the following components.

If you run on Linux you may have to increase the vm.max_map_count for the Elasticsearch container to start. Execute the following command to do that.

The -v flag is used for bind mounting, where the container will read the file from the host machine. Provide the path to the ballerina.log file, to be bind-mounted to the filebeat container.